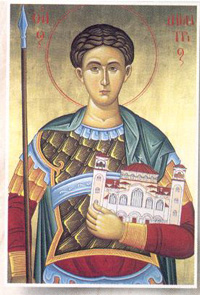 Saint Demetrios was born in Thesaloniki, Greece in 270 AD. He came from a wealthy family and because he was athletic in appearance and heroic in spirit, he became a high-ranking officer in the Roman Army at a very young age. (This is why he is depicted in Byzantine icons in military dress, either standing or riding a horse.) He considered himself a soldier of Christ first, and a military soldier second. He spent most of his time as a devout missionary, preaching the Gospel at secret meetings and converting pagans to the Christian faith.

At one of these meetings, he was captured and placed in front of the Emperor Maximian, who wanted to learn the truth about the conversions. Saint Demetrios proclaimed his faith by saying: “…only in Christ do I believe.” With that proclamation, Maximian ordered that Saint Demetrios be sent to prison and subjected to the cruelest tortures.

Even though Saint Demetrios was imprisoned, he did not stop preaching the gospel to those who came to see him. In jail, he was visited by his follower, Nestoras. Nestoras was a man of small stature and had come to ask for his beloved teacher’s blessing to fight in the upcoming gladiator games. The emperor had decided to use the games as a duel between Christianity and paganism by challenging any Christian to a fight against the athletic giant, Leo.

The most ancient icons of Saint Demetrios may be found in his temple in Thessaloniki where he is the patron saint. This is not just because he was born and died there, but because the people believe it was his intervention that saved the city during many attacks by Slavic nations, the Bulgarians, Arabs, Saracens and others. Even the liberation of Thessaloniki during the Balkan wars of 1912 coincide with the feast day of Saint Demetrios on October 26th.

In ancient times, the life of Saint Demetrios was commemorated with celebrations that lasted for months. These celebrations where accompanied by many events such as the famous market named “Demetria”. Traders and business people from Europe, Egypt, Arabia and Libya came to deal and trade. The festivities were also attended by philosophers, learned men of the time and art

Saint Katherine, who lived in Alexandria, Egypt during the fourth century A.D., was from a noble family and of excellent learning. Our patron saint was the daughter of the ruler Constantus and she was said to have been very beautiful, statuesque, and unequaled in kindness. She refused all proposals of marriage saying that the man she married must be young and equal to her in the four virtues: compassion, wealth, wisdom and beauty.

Katherine’s mother, being concerned, went with her daughter to seek the advice of a saintly hermit. After listening to the girl’s story, he said, “I know of a magnificent man who surpasses you in all ways.” Wanting to meet this man, Katherine asked who his mother was. The hermit gave her an icon of the Virgin Mary and told her to pray to the icon through the night adding, “If you are worthy of Him and if you approach Him in faith, His mother will allow you to see Him.”

That night, the Virgin and Christ appeared to her and the Lord placed a beautiful golden ring on her finger, saying, “Today I make you my bride, and for ages to all ages. Hold this joining sacred and never take unto yourself another bridegroom.”

Meantime, the Emperor Maxentius sent an edict throughout the empire that all should support his reign and worship his gods and turn from the popular Christian religion. Saint Katherine, of course, refused. Maxentius tried to persuade her to abandon her faith with a tribunal consisting of 150 philosophers and eventually with imprisonment, but when all efforts failed, he sentenced her to a deadly torture known as “the wheel”. Yet when Katherine was placed in the device with sharp blades, the wheels broke loose and killed many pagans. For this reason, the torturer’s wheel has served as a symbol for Saint Katherine and is often depicted in icons of her.

Finally, the emperor ordered her to be beheaded. Her death occurred on November 25th around the year 305 and her body is said to have been lifted by heavenly angels and taken to Mount Sinai. A band of monks later discovered her body and built a monastery near the spot of discovery. The relics of Saint Katherine are to this day enshrined in the monastery of Saint Katherine on Mount Sinai.

This great and wonderful athlete of Christ’s was the son of a wealthy and high-ranking Cappadocian family. George having lost his father at the age of ten, his mother Polychronia, who had become a Christian without her husband’s knowledge, returned to Palestine, her homeland, and brought up her son in the evangelical virtues. Handsome, intelligent and refined in manner, George embarked on a military career at the age of eighteen. He pleased his superiors and was quickly promoted to the rank of tribune in the imperial guard, and then, it would appear, to that of prefect.

Returning to Cappadocia after a victorious campaign and passing through the region of Attalia in Pamphylia, he freed the king’s daughter, who had been left at the mercy of a dangerous dragon, and killed the beast with a divine strength that he was given by his faith. Marveling at this demonstration of the strength given by Christ to His faithful ones against the forces of evil, the local pagans were all converted to Christianity.

At the time of the Great Persecution unleashed by Diocletian (c. 304), when the Emperor had summoned all the Eastern governors to Nicomedia to make them privy to his decrees against the Christians, Saint George, sensing that the moment had come for him to make public confession of Christ, gave all his goods away to the poor, freed his slaves and went to court. He appeared in the midst of the assembly and reproached the sovereign for unjustly shedding the innocent blood of Christians. Diocletian in stupefaction ordered his second-in-command Magnentius to interrogate this insolent young man about his faith. George replied that it was because he believed in Christ the true God that he had come without fear to reproach them. Having recovered from his amazement, the Emperor, fearing a tumult among those present, offered to heap honors on the Saint on condition that he sacrifice to the gods of the Empire. George replied: “Your reign will become corrupt and will quickly disappear at no gain to you; but those who offer a sacrifice of praise to the King of Heaven will reign with Him for all eternity!” At the sovereign’s orders, the guards beat the Saint on the stomach with their lances. His blood flowed down but, at the first blows, their weapons became twisted as thought they were made of some soft material. Christ’s soldier was then thrown into prison with a heavy stone on his breast. The next day, he appeared once more before the tyrant and showed the same firmness. They therefore tied him to a wheel suspended over sharp instruments, so that, when the wheel was turned, the Saint’s body would gradually be cut to pieces. Overcoming the pain with his overflowing love for God, Saint George unceasingly gave thanks to God. A voice was then heard from heaven, saying: “Fear nothing, George; I am with you!” And a white clad angel more resplendent than the sun descended to loose him and heal his wounds.

When he appeared safe and sound before the Emperor, two officers of the guard, Anatolius and Protoleon, confessed Christ with loud voices. They were beheaded at once. The Empress Alexandra (April 21) also declared herself to be a Christian, but Magnentius constrained her to withdraw to the palace. They then threw the Saint into a ditch filled with quicklime; but, like the Three Young men in the Babylonian furnace, he emerged unharmed after three days, greeted by the crowd with the cry, “Great is George’s God!”

The Emperor, still remaining insensible before all these demonstrations of Christ’s power, ordered that the martyr be forced to walk in shoes studded with red-hot nails. “Run, George, towards the object of our desire!” said the Saint, invoking the Lord’s help. And once again he presented himself, whole and radiant with grace, before the tyrant.

St. GeorgeBy the grace of God, he also escaped a poison prepared by a sorcerer called Athanasius. When the latter and those of his sort were still incredulous and reckoned that George was using magical arts, he, at their request, raised a dead man who had been buried for three hundred years. The man prostrated before the Saint and, declaring that he had been wrested from hell at George’s prayers, he confessed Christ. The defeated sorcerer then fell at the feet of the servant of God and, in his turn, proclaimed the true Faith. Diocletian ordered that Athanasius and the resurrected man be beheaded without delay.
Not a few of those who had come to believe in Christ as a result of Saint George’s miracles found the means to visit him in prison, in order to be instructed in the truths of the Gospel or to receive the healing of their ills. The Saint had compassion on the sufferings of each of them, and even restored to life a bull belonging to a peasant called Glycerius, who was then arrested and beheaded without any sort of trial.

The next day, Diocletian had George appear in the Temple of Apollo before a fairly large crowd. Pretending that he intended to offer sacrifice, the Martyr went into the temple and confronted the idol, making the sign of the Cross. The demons that lived in the idol then confessed in terror that Christ alone is the true God, and they escaped with a great hubbub, leaving the inert statues to fall to the ground. The priests and the pagans then drove the Saint out with loud cries and took him back to the palace. Attracted by the tumult, Empress Alexandra came out and forced her way through the crowd, crying out: “God of George, come to my aid!,” and she fell at the Saint’s feet. Unable any longer to contain his fury, the tyrant, whose heart was hardened as Pharaoh’s had been of old, ordered that they both be beheaded. But, some time before the execution, Alexandra peacefully gave her soul into God’s hands in prison.
When the day arrived, Saint George went to the place of execution followed by a large crowd. He gave thanks to God for His benefits, and, begging His help for all those who would trustingly invoke his intercession throughout the centuries, bent his neck under the sword and went to carry off the trophies of eternal glory.

Carrying out the Saint’s desire, his servant took his precious relics back to his country, to Lydda (Diospolis) in Palestine, where innumerable miracles were worked in the great church that was built in his honor.

The veneration of Saint George enjoyed enormous popularity throughout the Christian world, both East and West. He was chosen to be the protector of countries like Georgia and England; thousands of churches have been dedicated to him and every Christian soul sees in him the incarnation of the virtues of valor, patience in affliction and trust in the help of grace that Christ, the Leader in battle, has enjoined on all the soldiers enrolled in His army of devotion.