Years ago, a few Greeks linked by their religious and ethnic zeal, set forth a goal and began their arduous journey through the vast, consuming, and melting pot society for their new adopted land, to reach their dream. For years, spurred by hope, strengthened by accomplishments, they ascended difficult, future paths toward the realization of this goal.

The Community of St. Demetrios has been in existence for 80 years and its progress has been astonishing. So much has been achieved in so a brief time. Few communities can match its accomplishments and offer so much to their parishioners.

The very first organized meeting of Greeks included also the residents of Corona and took place on December 18, 1923 at the Archdiocese which was then located on 30th Drive in Astoria. Immediately following these few Greek families received permission from the then, Archbishop Rodostolou to attend services in the Archdiocesan chapel of St. Athanasios on 30th Drive. At that time, the first Greek School was established.

The people then felt a need to organize their own Church and in 1927 the ground on which St. Demetrios stands today, was purchased for $3,500. An architect was engaged and a $25,000 structure was agreed upon which could later serve as a basement for the someday completed structure of their dream. 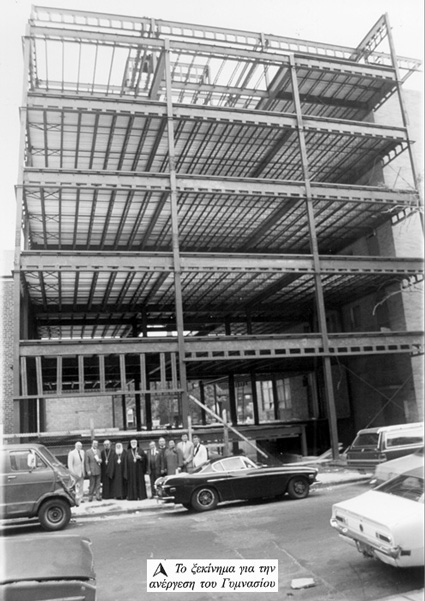 With only $306.00 in their treasury, these immigrant people consisting of furriers, tailors, bakers and laborers gathered together on November 7, 1927 gathered together to form a charter with the State of New York and proclaimed the “Hellenic Orthodox Community of Astoria, St. Demetrios Inc.” as their official name. Twenty days later a cornerstone was laid at the present site of our St. Demetrios Church and only a short six months later on April 1, 1928 the basement was Consecrated as the first Church building of the Community with Metropolitan Germanos Polzoidis as its pastor.

From the inception of the Community an afternoon Greek School and S.S Program was organized to hold on to the precious Greek language, customs, traditions and religion.

For nine years the parishioners worshipped in their small semi-basement Church. During holidays a tent was pitches on the grounds to accommodate the people. Meanwhile they dreamed and planned for the time when they could realize their ambition and complete the structure of St. Demetrios as they have originally conceived it. These were depression years and it wasn’t until 1936 before they could actually being building again. It took six years, but in 1942, the St. Demetrios Church as we know it today opened its doors. Five more years were needed to decorate the interior.

In the early 1940’s our founding fathers saw a need for expansion and two lots were purchased on 30th Street in the year 1952, realizing that their basement church hall could no longer serve the social needs of the growing community. Remember that World War 2 had just ended and there was a great deal of immigrant influx into Astoria. Our founding fathers had children who had married with their own children and the facilities needed expansion. The Greeks were here to stay for good in Astoria and the Church had to meet the needs of a budding Greek-American community. 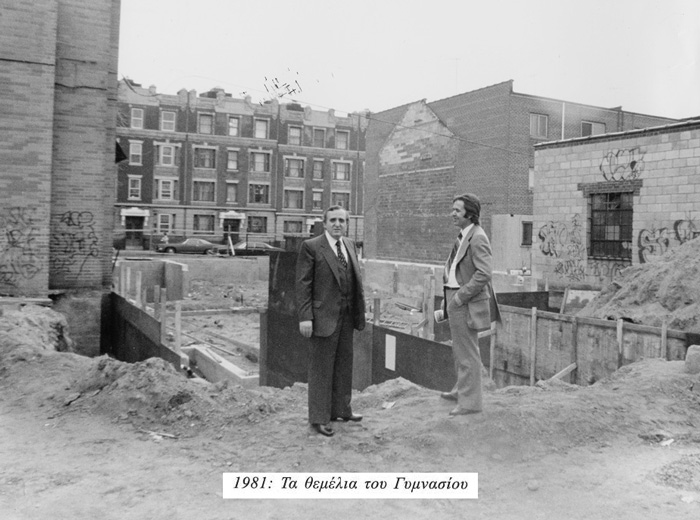 As a result of this change in 1952 it was decided to build the much needed Community Center for the proposed $425,000/ During the Easter, Agape Services the then Archbishop Michael laid the cornerstone bearing the motto “The lord, my light, and my Saviour.”

After much struggle on May 5th, 1957 the Center was completed and consecrated. It was September of that same year when St. Demetrios opened up its first Day School, with 267 kids, grades Kindergarten through eighth. As those children crossed the threshold, they carried with them the wholes future of the community; the education of its Greek-American youth.

In their attempt to then attack the age old problem of enlarging the Church they realized that another site was inevitable and the 33rd Street property was purchased in 1968 for $150,000. With the desire to build a new and most beautiful structure the inception of the present day Ss. Catherine and George Church evolved. A committee was formed to raise and build the $1,093,000 neo-Byzantine, three tiered structure. Groundbreaking took place on September 22, 1971 the ceremonial “opening of the doors” took place and the Consecration followed on October 26, 1975. Both of these occasions were again celebrated with great dignity, by His Eminence Archbishop Iakovos.

In 1967, along with all the plans for the new church, ways and means were being sought to alleviated the congestion at St. Demetrios School, and accommodate the many students on waiting lists. A study was made to renovate the large auditorium of the Community Center and divide it into classrooms. This idea was shelved as the community was still caught up in the building of St. Catherine and George. With this new building completed the kindergarten and first grades were moved to the classrooms there in September 1974.

Nevertheless, St. Demetrios School was still overcrowded. So on October 10, 1974 a building next door to St. Catherine’s was purchased for $125.000 to be renovated to create more classroom space. To further their aim to educate their young two more buildings were purchased on 30th Street for a cost of $130,000. 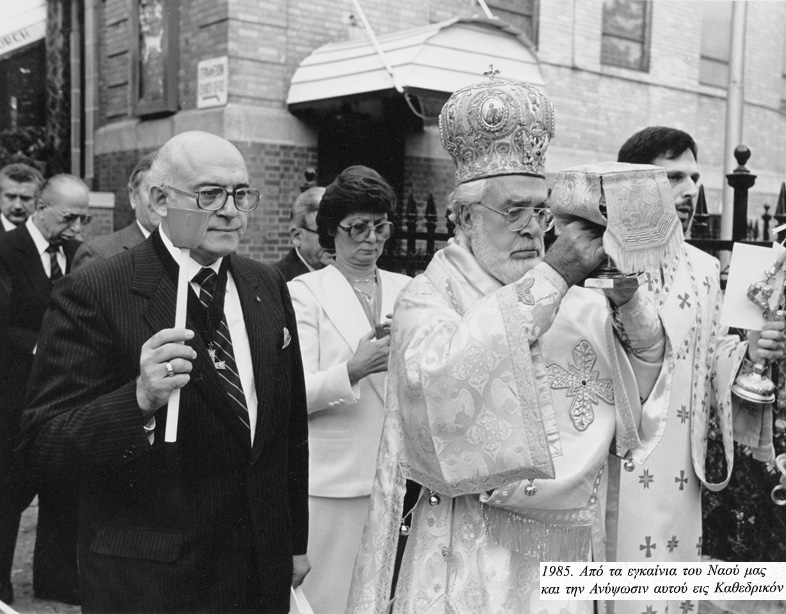 In 1978, the School Expansion Committee was authorized to negotiate with architectural firms for the design of the St. Demetrios High School building and the development of construction plans. A committee was formed and undertook the task to raise the necessary funds which were close to half-a-million dollars.
The Parish Council acted on a general assembly resolution to purchase the building at 22-48 33rd Street which was next to the St. Demetrios annex.

On January 30, 1981, ground breaking ceremonies took place with His Eminence Archbishop Iakovos and many dignitaries present. The Contractor was required to complete the building for occupancy by September 1982. Working diligently with the Architect and the Contractor, the School Expansion Committee supervised the work and not only was the St. Demetrios H.S. building ready three months earlier than scheduled but its design and construction won an award from the Queens Chamber of Commerce.

On May 9, 1982, the ceremonial “cutting of the ribbon” took place marking the opening of our new High School building. With His Eminence Archbishop Iakovos presiding over the ceremony attended by over one thousand people, the motto “We believe, therefore we build” become a reality.

On June 12, 1985, a letter was received by His Eminence announcing the grand finale of events for St. Demetrios Church and the entire Greek-American Community of Astoria. It was announced that our Church would be consecrated on October 20, 1985 and elevated to the rank of Cathedral for Queens and Long Island. This historic event took place as scheduled and a banquet followed with over 1200 communicants presents. Truly this was another milestone in our Community.

Almost a year and a half after the elevation of St. Demetrios Cathedral, on April 10, 1987, the Hermitage of Ss. Raphael, Nicholas and Irene became part of our great Community. 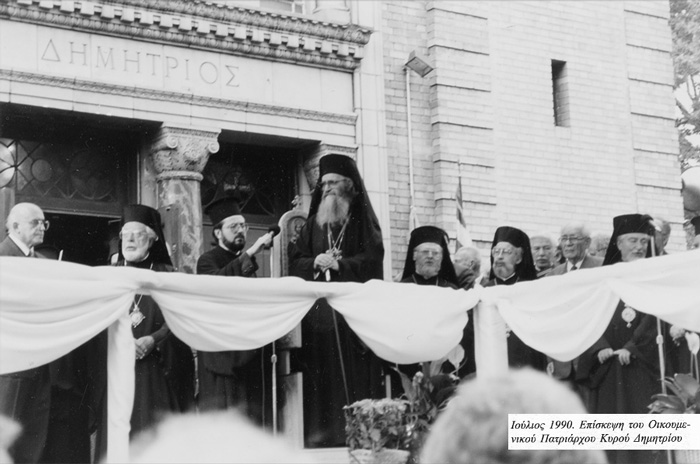 Another historic event took place just this year on May 17, 1987. It was the elevation and ordination of Astoria’s own Bishop at the Archdiocesan Cathedral. The Pastor of the Community, Archimandrite Anthimos Panagiotopoulos was elected to serve the Community in the rank of the Bishop holding the Titular Position of Bishop of Troas, an ancient sea in Asia Minor. Archimandrite Anthimos was enthroned on June 14, 1987 at St. Demetrios Cathedral. Polla ta eti!

In the community’s 90 year history so many goals and dreams have been realized. This community is always willing to accept the challenge to move forward in every way. The school which opened in 1956 with 267 students has blossomed into a full Day School with over 700 Greek-American students. This alone is an accomplishment which deserves much merit.